Astrologers are Liars:-
The "Precession of the Equinoxes" and The Age of Aquarius


Astrologers are lying - even when they talk about the positions of the planets and stars.

Just for one specific example:- Astrologers dishonestly pretend that the sun travels across Aries between March 21 and April 19 each year.

However, they are wrong by nearly four weeks. The sun actually travels across Aries from 15 April to 15 May - a difference of 26 days.  A difference that is increasing.

Astrologers have invented something called the "Zodiac" which is a circle of 12 constellations with names like Aries, Taurus and Gemini etc. through which the sun appears to pass on its yearly path across the sky - a path often also called "the ecliptic".

The Ecliptic and The Zodiac


Astrologers usually divide this circular "ecliptic" into 360 degrees and allocate each constellation in the Zodiac exactly 30° of it.

March 21 is a special day known as the spring or "vernal" equinox. This is the day that astrological tradition says is the start of the Zodiac, the day that - according to the astrologers - the sun appears to enter Aries, the first star sign of the Zodiac.

The first 30° along the ecliptic after March 21 is traditionally designated as the zodiacal sign Aries.

The next 30° of the ecliptic is nominally designated Taurus, and so on through the twelve signs of the zodiac so that each is said by astrologers to occupy 1/12th ( ie exactly 30°) of the zodiac's circle. Note - each constellation is given the same amount of this of this 360° no matter how much of the ecliptic it actually takes. 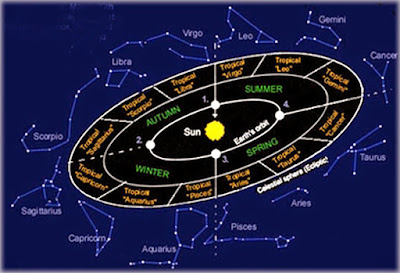 As you can see in the picture above - some constellations are actually very big - like Taurus , Virgo and Leo, yet by tradition they are allocated the same length along the ecliptic as smaller signs such as Aries.

Here's the ecliptic laid out as a straight line. It should be easier to see that some constellations such as Virgo are much bigger than  others such as Aries. The purple line indicates the spring equinox on March 21st. You can see that it is in Pisces "precessing" left to right.

As has already been said  - Astrologers like to start their astrological year on March 21, because that is the spring (or "vernal") equinox - when the day and night are of equal length. Traditionally, they pretend that the sun appears to be exactly at the start of the constellation known as Aries, and thus the point on the ecliptic where the sun is at noon on March 21 is traditionally called the "First Point of Aries"

Currently - the vernal point is located near the beginning of the constellation Pisces, having been travelling backwards through that constellation since the year 67BC, when it crossed over from Aries. It will eventually pass into Aquarius in the year 2597 - hence "the dawning of the age of Aquarius"

In the above diagram you can see that all the astrological signs are allocated the same length along the ecliptic (see the bar labelled "Traditional Astrological Map of the Ecliptic") whereas they actually take different lengths.

Also you can see in the above diagram that the Spring Equinox (on March 21) actually occurs in Pisces rather than Aries.

The first 30° along the ecliptic after the vernal equinox is traditionally designated as the zodiac sign Aries. This is depicted by the two purple lines in the diagram  above.

However, these 30° no longer fall within Aries. They did around 2000BC, but they don't anymore, having stopped doing so around 67BC. The first  30° after the spring equinox is now entirely within Pisces.  This means that people who think that they are "Aries" are really "Pisces." 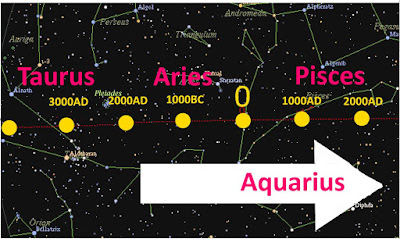 In the above diagram, the Zodiac goes from right to left - (Aries, Taurus etc) but the precession is moving left to right in the direction of Aquarius. Two thousand years ago, near the year labelled "0" in yellow, the spring equinox was at the beginning of Aries (which is the end of Pisces).

Currently - the vernal point is located near the beginning of the constellation Pisces, having been travelling backwards through that constellation since the year 67BC, when it left Aries. 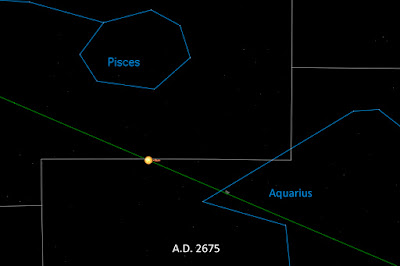 In AD 2675 the vernal point will cross into the constellation of Aquarius.